If louche had a location, the Marsella would be it.

There is certainly no shortage of late-night places in Barcelona, but with its ceiling stained caramel from centuries of cigarette smoke, and the feeble light that shimmers from its ridiculously ornate electric chandeliers, this nearly 200-year-old bar— reputedly the oldest in Barcelona — feels more late-night than most.

But more than anything, Bar Marsella gets its ambience from its house drink: absinthe.

“Everybody orders it,” says the bartender Miguel. “The old-timers, the students, the starving artists, the tourists.” And indeed, on a recent night at 1 a.m. or so, the infamous spirit cast its greenish glow from tables that ranged from a group of rowdy Americans on their study abroad program to a solitary shell of a man, hunched over a glass. Derived from wormwood and herbs, absinthe is powerful stuff, though the hallucinatory properties that gave it the nickname the Green Fairy, and the reputation for undoing legions of fin-de-siècle bohemians, have never been proven.

It’s a little hard to believe that the bar’s many customers actually like the acrid anise-flavored taste, but the ritual of preparing absinthe is admittedly pleasing and somehow eases the transition between the pre-midnight eating and drinking and pre-6 a.m. clubbing that comprise Barcelona’s night-life scene. Patrons set a small fork across the top of the glass, put a sugar cube on it, pour water over the cube until it dissolves, and stir.

The Marsella is one of those places that Hemingway supposedly loved to frequent (Hemingway being to bars in Spain what George Washington is to inns in New England). Its location on a corner where working girls still practice the profession that gave the neighborhood — once called the Barrio Chino; more lately renamed the Raval — its red-light reputation only adds to the seedy allure. 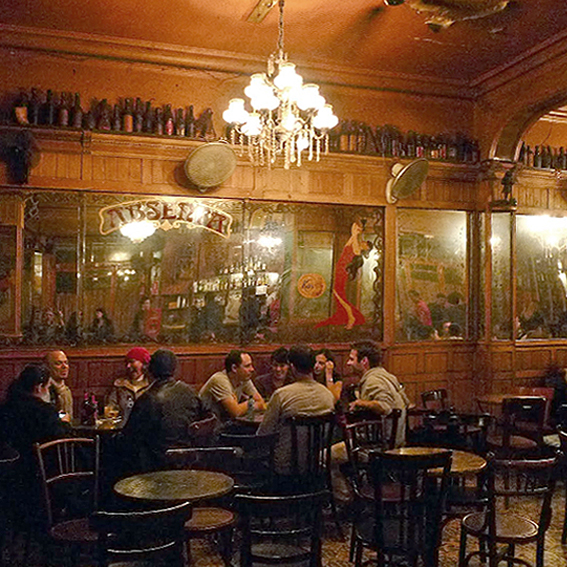