I started doing a lot of dreaming, during 2013…

I WANT TO LIVE IN A VAN AND TRAVEL

The desire became too great…

I Quit my job

I knew that for anything to happen I’d have to quit my job immediately and tell people my plans. This was the first step and was all I needed to do so I’d have no other choice but to work on my dream. I had some money saved up from working on offshore gas platforms in the North sea.

On the 20th September 2013, I gave my months notice and got asked many questions that I didn’t yet know the answers to myself. At this point, I didn’t really know what I was doing. I was just trusting new steps would appear before me once the current one had been completed, although I couldn’t really say this to my employer or colleagues.

I Moved out my house

I put things outside onto the street (Sharrow Vale Road, Sheffield) with notes saying ‘free’. I gave away the sofas, the bed, chairs, and tables. One woman came with a van and took most of it because her friend was leaving her husband and needed to set up a ‘secret house’. She seemed very grateful. I gave away my shirts, trousers and shoes to the charity shop On Ecclesall Road, sold my car and packed a bag to go back to my parents house while to work on the van – I hoped this would be one step back to take two steps forward.

I Converted a big old van

Bought a van (LDV Convoy) on Ebay. The first few days I was overwhelmed with things I needed to do. I didn’t have a clue what to work on first. The van was a mess. It got worse the more time I spent with it; more rust, holes in floor, oil leaks, bodge after bodge. It was a write-off and it even had forklift truck marks underneath where it had probably been shifted about some scrap yard. (see post on work done).

Like running through treacle. My thoughts and dreams consumed with van conversions. I grew a beard and didn’t see friends for months.

February 2014, progress made. The conversation was so close to completion.  I put a few pictures around the Internet and on this site. Within a day, the server was overloaded and I was suspended from my hosting account. Over 70k visits in the first week of being online. I couldn’t believe it. This gave me a new wave of motivation just when I needed it – progress was slow and I was desperate to leave the country.

Then I Drove south 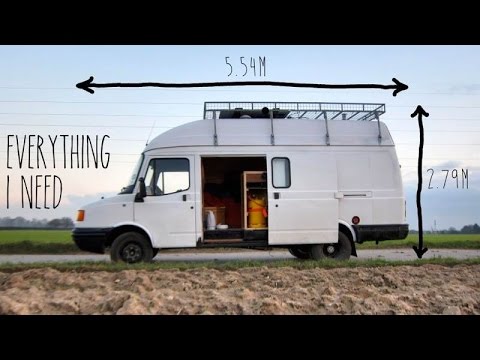