Some history and background

Vänerns Seglationsstyrelse, (VSS) built the Stavik lighthouse station in 1860. (The board for navigation on the Lake Vänern).

VSS has been in operation from 1799 until 2004 when the Swedish Maritime Administration took over.

In Lake Vänern there are approx. 100 lighthouses. Some “big”, other are just small lights.

All white, hexagonal and with wood panelling except Hjorten that since 1905 are covered with white painted zinc plates.

At Vättern and in the Gulf of Bothnia there are also some other “sisters or cousins” wooden towers.

Above photo from 1905. In the middle, “last” and third lighthouse keeper, Anna-Lenas grandfather Harry at age 5.

Harry is surrounded by his brothers and second lighthouse keeper, his father and mother, Johan and Lizette Eriksson.

Anna-Lenas grandfather Harry was born 1900 and died 1980. He and grandmother Sonja were the latest permanent lighthouse keepers and were living in the house until 1973. The lighthouse was electrified in the early fifties; it’s on the mainland so it was 220 volts and AGA gas back up. In 1998 it became a 12 V system loaded from 220 volts and with a battery back up function.

In 2003 we, the Quist family, bought the whole peninsula including the cottage and the lighthouse.

During the summer 2003 we completely rebuilt the lighthouse. See  Renovation.

The lighthouse is in operation and the top floor, lantern, is rented out to the Swedish Maritime Administration. 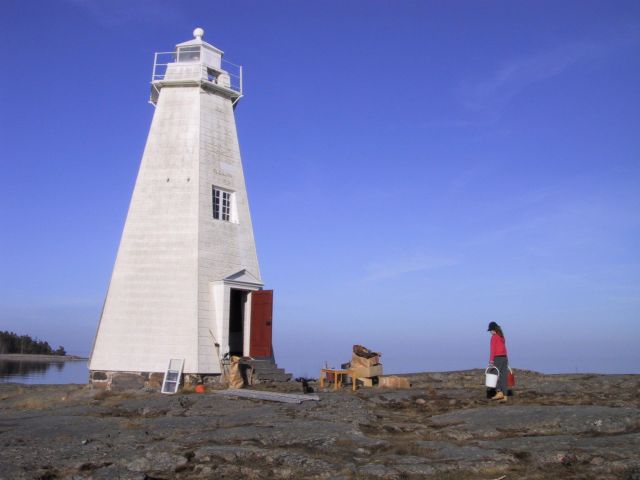